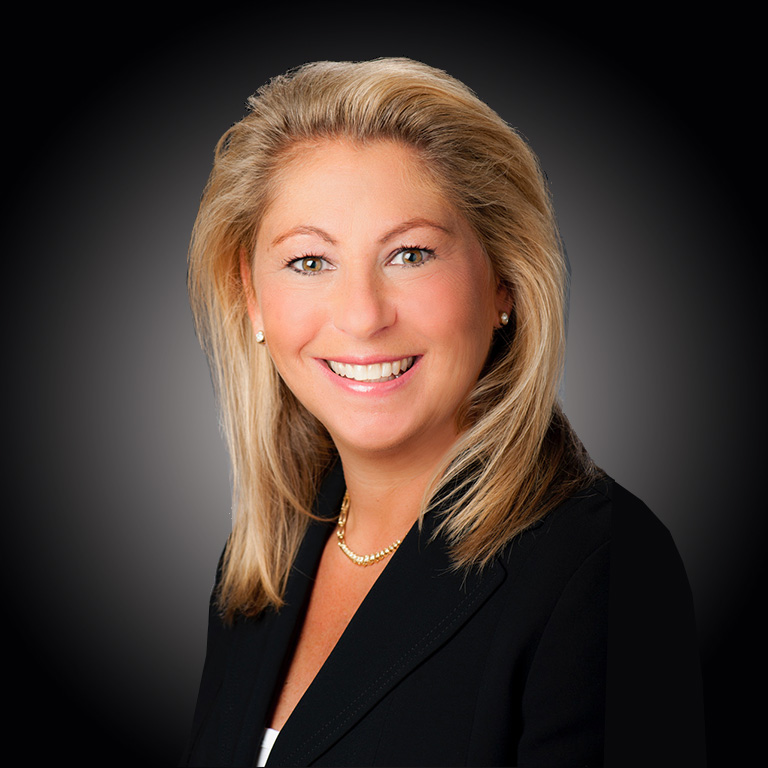 Karen Rose Karpousis is a partner at Charny Karpousis Altieri & Donoian, P.A. who has practiced family law exclusively since 1992. Her knowledge and expertise in the courtroom began during her clerkship with the Honorable Isaiah Steinberg, Judge of the Superior Court of New Jersey, Camden County.

Since then, Ms. Karpousis has practiced divorce and family law in New Jersey, building a well-earned reputation for providing caring yet aggressive representation with a diverse clientele that includes small business owners, licensed professionals, W-2 wage earners and dependent spouses. Ms. Karpousis’ effectively and efficiently represents her clients in divorce, custody issues, child support, alimony, equitable distribution, pre-nuptial agreements, post-judgement motions, adoption, relocation and applications to the Court for protection from domestic violence and abuse. She is also a certified Family Law Mediator, assisting those who prefer an alternative to litigation.

Ms. Karpousis is a sought after speaker and panelist. She has lectured at seminars for the New Jersey Institute of Continuing Legal Education on family law issues, such as equitable distribution, and also for the American Trial Lawyers Association. In addition, she was a speaker on the topic of “Alimony & Child Support” as part of a Panel co-sponsored by the Camden and Burlington County Bar Associations and a guest lecturer for a Burlington County College sociology class offered at McGuire Air Force Base. Ms. Karpousis has appeared as a panelist on the “Legal Line” television show produced by the Camden County Bar Association and has volunteered for the Rutgers University (Camden) Pro Bono Domestic Violence and Law School Mentoring Programs. She currently serves as a Matrimonial Early Settlement Panelist in Burlington, Camden and Gloucester Counties and is a Master member of the Thomas S. Forkin Family Law Inns of Court, whose mission is to foster excellence and professionalism, exemplary ethics and legal skills for judges and lawyers.

Over the past 28+ years she has been practicing divorce and family law in South Jersey, Ms. Karpousis has received numerous professional accolades. This includes being named to the New Jersey “Super Lawyers” list each year since 2007 in recognition of her expertise in divorce and family law – an award given to only the top 5% of State’s attorneys within their respective area of practice. She has also been named to the South Jersey Magazine “Awesome Attorneys” list, recognized on the SJ Magazine “Top Attorneys” list and selected for inclusion in the Princeton Premier Leaders and Professionals Honors Edition, registry.*

Ms. Karpousis enjoys sharing her professional and life experiences with youth. She regularly supports the Alice Paul Institute as well as has been a volunteer judge at the William Allen Middle School (WAMS) 8th Grade Exit Assessment and one of several volunteer judges at the 2019 Vincent J. Apruzzese High School Mock Trial Competition sponsored by the NJSBA Foundation. Work and the law are only part of the story. She has been a major fundraiser for the Juvenile Diabetes Research Foundation and other organizations throughout the community. Ms. Karpousis is an avid sports fan and herself a 4-year letter winner in gymnastics while attending college at the University of Pennsylvania. She remains active at her alma mater and has proudly served as Penn’s Gymnastic Sports Board Chairperson since 2007. In 2017, Ms. Karpousis received the H. Hunter Lott, Jr. Award in recognition of her service, dedication and support of Penn’s Athletic Department.

» SEE WHAT CLIENTS ARE SAYING

Charny, Karpousis, Altieri & Donoian, P.A. is a highly-recognized team of lawyers concentrating their practices in Divorce & Family Law. If you need legal advice on a Divorce or Family Law issue in South Jersey, please contact our Marlton offices at (856) 574-4343 to schedule a confidential consultation today. You can be confident you will attain the highest level of quality advice specific to your case.

*Information regarding the comparing organization and the selection methodology can be found at https://sjmagazine.net/august-2021/top-attorneys-south-jersey-lawyers-2021, www.southjerseymagazine.com/article/2547/Methodology, www.superlawyers.com/about/selection_process.html. No aspect of this advertisement has been approved by the Supreme Court of New Jersey.